Tuckahoe High School's history is quite unique, and few people know about it.

Since Tuckahoe did not have a school, the students that resided in Tuckahoe were transported to other schools, such as Bronxville, Mount Vernon, and Yonkers. Once it was agreed that there was a need for a school to educate the students from Tuckahoe, the Board of Education requested a bond to cover the costs of construction for Tuckahoe High School. Construction was set to start in the spring of 1930, but never began until the winter of 1930. Much had to be done in order for the construction to be completed.

The original cost of the construction was estimated to be $660,000. However, in November of 1930, it was decided that an extra $180,000 would be needed. The taxpayers of Tuckahoe were astounded by the growing cost. The cost nearly tripled, but the people agreed because the school was nearly finished. The school wasn't finished until the fall of 1931.The seniors petitioned to attend Eastchester High School, but because there was no room, their petition was denied.

The original structure of the school is the result of the magnificent architectural ideas of Knapp and Morris of New York City. The modern designs of the school were mainly chosen to provide for the needs of future generations. When the school originally opened, it was equipped to hold up to 700 students. The original auditorium was able to seat 1200, with a balcony, which stood where the current art room is.

It was written that the gymnasium was viewed suitable to hold community activities and spectators alike. It was located where the current library stands. There were modern labs for physics, chemistry, and biology. The Business Department was equipped with typewriters, and the Household Arts Department was situated in a model suite with sewing and fitting rooms. The school was built with the possibility that an extension could be added without disturbing the original structure. In 1934, two years after the grand opening, sixty-thousand square feet of land (located east of the school) were added to the property of the high school to provide Tuckahoe High School with its own athletic field. The land cost $21,500.

On February 24, 2010 Tuckahoe High School was listed on the National Register of Historic places. 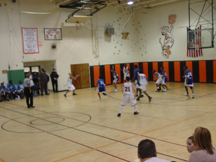